The Toyota Corolla, the perennial best selling subcompact in America and the world’s best selling car (in total), has been refreshed for the 2011 model year, with a new front and rear appearance, standard stability and traction control, and a free maintenance plan.

Unveiled at the Los Angeles Auto show on November 16, 2010, the 2011 Toyota Corolla was slated for sale in December 2010. It continued to have standard stability control, traction control, antilock brakes, electronic brake force distribution, and emergency brake Assist. New is a system used by most other major automakers for years, a brake override which cuts the throttle when the brakes are used.

Three trim levels are sold, the un-named base model, the Corolla LE, and Corolla S; all use the same engine, the new-for-2008 1.8 liter dual cam four cylinder, which pushes out 132 hp at 6,000 rpm and 128 lb-ft of torque at 4,400 rpm (coincidentally, almost identical to the 2.0 liter 1995 Neon). Dual Variable Valve Timing with intelligence (VVT-i) controls valve timing on both the intake and exhaust camshafts to optimize efficiency, and further steps were taken to cut friction within the engine.

A four speed automatic transmission is standard on the LE, while a five-speed manual or four-speed automatic are available on other models; the four-speed is electronically controlled, has a flex-lockup torque converter, and has an uphill/downhill shift control in the S position. Gas mileage is rated at 28 city, 35 highway with the manual, and 26 city, 34 highway with the automatic.

The 2.4 liter Camry engine option has been dropped, along with the five speed automatic.

The Toyota Corolla has a stiff body structure thanks to high tensile-strength steel, gussets and cross members. A compact, rigid L-arm-type MacPherson strut front suspension uses a stabilizer bar for stiffness and better cornering. The Corolla’s torsion beam rear suspension employs a coil-over-shock arrangement which balances comfort and performance, in a compact space. 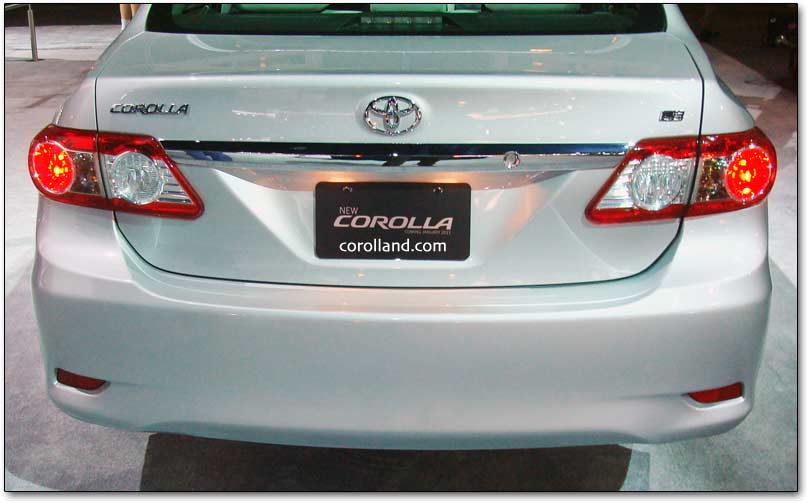 Built on a 102.4-inch wheelbase, the Corolla provides room for five, and its 12.3 cu. ft. trunk rivals midsize cars’ trunks in capacity. The A-pillar was pulled forward and the C-pillar pushed rearward, helping aerodynamics. Engine undercovers improve air management under the car on all models. 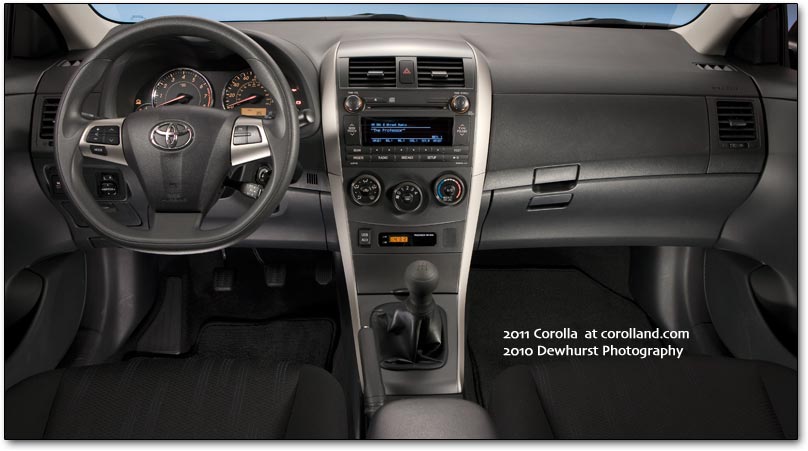 Above the dense mesh grille that helps form the now familiar Toyota T-face, an anti-chipping coating prevents damage. The side-view mirrors have increased in size; heated side-view mirrors are available. The S model adds a sporty look while also enhancing aerodynamics with a front spoiler, rocker moldings, and upper and lower rear spoilers.

The A-pillar was specially profiled to cut wind noise; the windshield is made from acoustic glass and the window-frame structure is designed to reduce vibration of side glass. The windshield molding, wiper blade covers and shape of the cowl air intake louvers are all designed to minimize noise (the carpet also provides better insulation). Windshield washer nozzles are partially shielded by the rear edge of the hood, instead of sitting atop the hood or cowling.

A new seat color and pattern enhances Corolla’s contemporary looks, while the combination meter design has been changed to enhance clarity. The instrument panel upper and door trim upper color and steering wheel have been changed.

Storage spaces include center console side pockets; a storage box above the usual glove box; front and rear door pockets that can safely hold 20-ounce bottles; a console box with a large-capacity main tray and a smaller accessory tray; an overhead console useful for storage of sunglasses or garage-door openers; and a rear-seat center armrest with an integral drink holder.

The Corolla is engineered to absorb and disperse impact energy throughout the entire body structure, including front and rear crumple zones. Strengthened door beltline reinforcements help share the impact load, which in side impacts is also directed to the underbody. A direct tire pressure monitor system comes standard on every Corolla.

All Corolla models are equipped with six standard airbags, including advanced front airbags, front seat-mounted side airbags, and front-and-rear side-curtain airbags. Seatbelt pretensioners retract the seat belt at the time of a frontal collision, and the dual-stage force limiter helps limit the seat belt force applied to the passenger’s chest. Front seats integrate active headrests. If the vehicle is struck from the rear with sufficient force, a cable-actuated mechanism in the active front headrest moves the headrest upward and forward to help limit the movement of the occupant's head. The Corolla also features an energy-absorbing steering column.

Toyota’s 36-month/36,000 mile basic new-vehicle warranty applies to all components other than normal wear and maintenance items. Additional 60-month warranties cover the powertrain for 60,000 miles and corrosion with no mileage limitation..