You can be forgiven if you thought that Toyota was asleep at the switch with the 2013-2018 Corollas. They were decent enough cars, and maintained Toyota’s legendary reliability, but they weren’t special—like my first Corolla, a comfortable, zippy, thrifty 1998. For one thing, the 2018s had about the same power level as my ’98, despite two decades of increasing power in other cars. 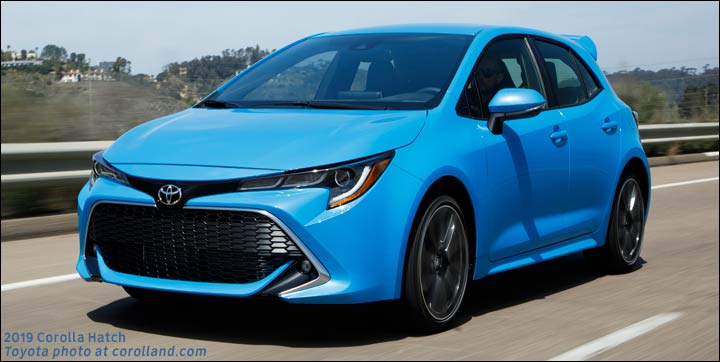 Mr. Toyoda was not happy with Toyota’s apparent state of complanency a few years back, and a large team worked out a completely new platform/architecture dubbed TNGA (Toyota Next Generation Architecture) for everything from Avalon to Yaris. The Camry was one of the first; the 2018 Corolla Hatchback was the first Corolla to move over, and the sedans followed with the 2019s. More comfortable and quieter than the 2018s, they also handle better—as they should, being wider, lower, and longer. The new bodies have less weight and more torsional rigidity, for better ride, handling, and performance; they use more aluminum and high- and ultra-high strength steel.

Under the skin are clever new transmissions and a longer-stroke 2.0 liter engine that boasts 13:1 compression and both direct injection and port injection. The starting price for the 2019s was $20,910 plus destination in the US. That price fell for 2020 and 2021, and was around the same for 2022.

The hatchback was released first, in the SE and XSE grades. The styling was intended to be along the lines of the “shooting brakes,” both muscular and sophisticated.

The new hatchback was an inch lower, 1.2 inches wider, and 1.5 inches longer than the 2018 Corolla iM, with wider tracks and a longer wheelbase. The hood was two inches lower, for forward visibility. The front styling was based on Toyota’s Under Priority Catamaran and Keen Look; J-shaped Bi-Beam LED headlamps came standard, with 16 to 18 inch wheels. (The sedans would also have LED headlights.) THe front overhang is 0.8 inches less, while the rear overhang was stretched by 0.8 inches. The plastic hatch (made from Toyota Super Olefin Polymer and Acrylonitrile Butadiene Styrene, or ABS) was moved 14°, a steeper angle.

All Corolla hatchbacks get LED taillamps with a diffusing inner lens, along with LED headlamps, a chrome rear diffuser, and alloy wheels. The XSE, though, has 18 inch wheels, LED fog lamps, a chrome grille surround, and optional adaptive front lighting that alters the beam by speed and steering angle (it’s only available with the CVT). The headlamps move both vertically and horizontally.

Inside, passengers find that the instrument panel has a 0.9 inch thinner upper surface; the center console is 1.7 inches wider, and longer as well, with a small-item tray and optional Qi wireless charging. 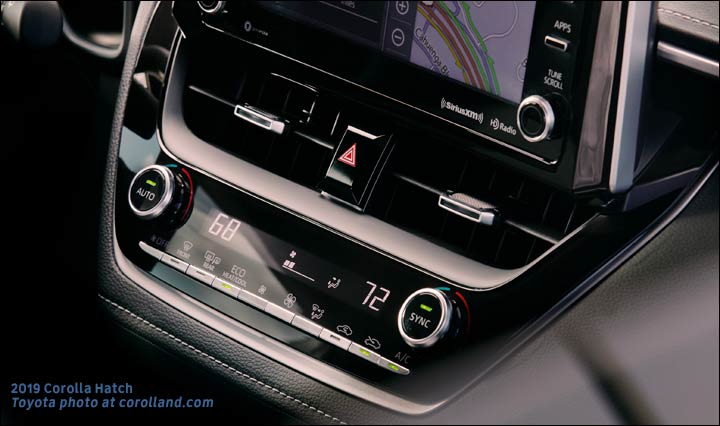 The engines and transmissions

After years of similar engines, including one completely new four-cylinder with the same power as the old one (but cheaper), Toyota added a long-stroke 2-liter engine with 13:1 compression. This engine has direct injection, coupled with port injection; the idea is to make it both efficient and responsive. The long stroke should naturally help with low-end torque. Buyers can still get the old engine, though.

The new K120 CVT is a continuously variable transmission, but not purely driven by belts or bands. Now, Toyota has included a special, traditionally-style “launch gear”, sort of a two-speed automatic sitting next to a standard CVT. That gives a special low gear when the driver starts out, which shifts to a normal gear, then hands over the works to the CVT. The reason is because CVTs tend to have low efficiency in lower gear ratios; so now when drivers start, they will have gear drive, avoiding a moment of sluggishness and wasted power (the CVT can also be smaller and lighter). The end result is also a wide transmission range which speeds launches and improves highway economy.

Combined, the two systems bring an excellent, class-leading range of 7.5” similar to much more expensive nine speed automatics. Reducing the torque load of the belt meant that the belt and pulley could be smaller, increasing shift speeds.

Entune 3.0 Audio Premium, only optional on XSE CVT, is an 800-watt system with eight JBL speakers, “Clari-Fi,” and dynamic voice recognition and navigation. The system includes horn tweeters in the A-pillar at ear level, 6.7-inch door woofers, branding, and wide-dispersion midrange speakers. “Clari-Fi,” in Toyota’s words, “analyzes, rebuilds, and restores audio signals that were lost in the digital compression process.”

So far, Entune 3 has been rather problematic, but this should be resolved in the next year or two.

The body, with its greater track and wheelbase, is an inch lower and wider, and 1.5 inches longer than, the 2018 Corolla was. The hood was dropped by two inches to help with visibility and aerodynamics; the front overhang is 0.8 inches lower, but the rear overhang was stretched by 0.8 inches. The hatch was made from Toyota Super Olefin Polymer and Acrylonitrile Butadiene Styrene (or ABS plastic); it has a 14° steeper angle. Despite the larger size, the Corolla still comes in at under one-and-a-half tons—the base model weighs in at 2,998 pounds.

The front suspension keeps the MacPherson struts, but with new dimensions and spring rates. Sliding parts have lower friction for faster reactions (suspension friction dropped by 40%). The rear suspension was replaced by a more expensive multi-link design with a stabilizer bar. Toe-in was retuned (by moving the lower control arms) for higher-speed turns, and the shocks (dampers) were moved forward to cut low-frequency input and make space.

The modernized instrument panel has an inch-thinner upper surface; the center console is nearly two inches wider, with optional wireless charging. The center screen was brought up to the new class standard of eight inches.

Safety includes standard pre-collision detection, including pedestrian detection, to see a preceding vehicle or person, day or night (in the past, it was only during the day, and excluded bicyclists); it can alert the driver and, if needed, hit the brakes. Even the base model has radar-based cruise control with automatic stopping and a link to the turn signals. Other safety features include:

I have a 2019 Corolla Hatchback, fully loaded except for premium sound. I can vouch that it has plenty of pep with the CVT. It’s new so we haven’t had floored it, but there is no problem merging onto the local interstate. We have the XSE with low profile tires and 17 inch wheels, and it handles like a go-cart. It’s not for four adults if you have long legs; okay for children, not for tall teenagers.