The rear wheel drive Toyota Corolla was first introduced in Japan in model year 1966. Two years later, it was brought to the United States, replacing the unpopular and barely-noticed Crown; this new Corolla lasted only two years with its original 60 horsepower (gross; at 6,000 rpm) 1.1 liter engine.

The Corolla was small by American standards, with a 90 inch wheelbase; its tiny 66 cubic inch engine, however, moved the Corolla to an 87 mph maximum speed without undue sloth, because the entire vehicle weighed 1,637 pounds (the wagon checked in at 1,731 pounds). Torque was balanced with horsepower at 61.5 lb-ft at 3,800 rpm. A two-barrel carburetor got the most out of the engine - in those years most entry-level cars used a cheap but power-robbing single-barrel.

The Corolla used modern unit-body construction, and the engine was hooked up to a four-speed synchronized manual transmission, at a time when most cars had a three-speed as their base manual and a four-speed as a sporty option. The small engine was sturdy, with five main bearings. 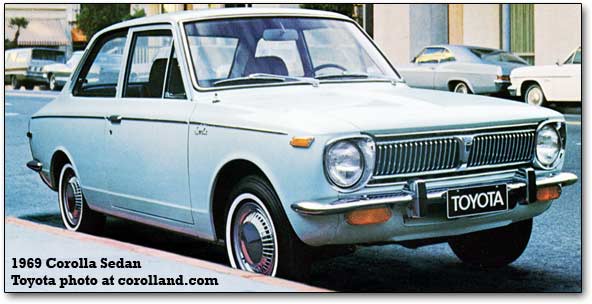 The 1970 model was bigger, powered by a 1.2 liter engine with 73 net horsepower; the increased power allowed for an optional automatic transmission. This Toyota Corolla car became the second best selling import car in 1970.

The next year, 1971, brought an even bigger engine, weighing in at 1.6 liters; it produced 102 horsepower, gross, and its SR5 option brought a five-speed manual transmission, at a time when sporty American cars were restricted to four speeds. The American Corolla weighed a mere 1,566 pounds, and moved rather quickly; the standard four-speed synchronized manual transmission had one more gear than most American sticks. A fastback coupe and two door sedan made up the line, and with an $1,830 starting price, the Corolla promised more value than just about any other car on the road.

Like most cars of the time, these Corollas had rear wheel drive, unit-body construction, and a solid rear axle with leaf springs. They had springs and struts in front, which was not unusual for small cars but was not yet popular among American automakers. Both front and rear brakes were drums, and wheels were 6 inches wide by 12 inches tall; the 90 inch wheelbase was shared with the Land Cruiser, while the 153 inch length and 59 inch width let it fit in practically any garage.

Though sales were small, there were three models: coupe, two-door wagon, and sedan, starting at less than $1,700 - a bit cheaper than the popular Novas and Valiants (whose base engines were roughly 150 horsepower gross, 100 net). Some magazines talked happily about their economy, though quality was still a question, and rust was a severe problem. Corollas in coastal states were likely to rust apart before their engines had a chance to wear out.

1974 saw the third generation, and the Corolla's strongest popularity - including the inexpensive Corolla Tercel model [which isn't really fair since the Tercel was a completely different vehicle], it was the best-selling vehicle in the world from 1974 to 1977. Five years later, in 1979, a fourth generation appeared, still with rear wheel drive. This was to last until 1984, when the fifth generation Corolla came with front wheel drive and a coupe version, the GT-S,with a 16 valve engine (the GT-S remained in production through 1991.)

The so-called Corolla Tercel was first introduced to the United States in 1980.

The third generation had five models - sedans with two and four doors, a four door wagon, a two-door standard hardtop, and a two-door SR5 hardtop - but it had the same basic drivetrain, albeit with a catalytic converter. A two-door hatchback with a split folding rear seat and a "sport coupe" were added in 1976, when Toyota bragged:

Corolla offers you the lowest price and highest mileage we have to offer. Better gas mileage in 1976 than in 1975... we check every Corolla engine with ten electrical and mechanical tests before we put it into a Corolla. Then we check every car...from the power front disc brakes to the cigarette lighter...the alignment of the hood to the interior trim. ... Most Corollas come standard with features like fully reclining front bucket seats, wall-to-wall carpeting, steel-belted radials, tinted glass, even an electric window defogger.

An updated grille appeared in 1977.

The most dramatic change to date came in 1979, as all models except the wagon gained coil springs in the rear suspension, the wheelbase was lengthened to 94.5 inches, and a brand new engine was added - producing 75 net horsepower, which is more than the prior 102 gross horsepower. The transmissions carried over, but in 1982 a four-speed automatic was brought out - one of the first available in a mass production car - and the engine was down-rated to 70 horsepower.

In 1983, the 1.8 liter four-cylinder was replaced by a 1.6 liter single-overhead-cam powerplant that continued to feature 70 net horsepower, but boosted gas mileage by 12% to an amazing 36 mpg city, 47 highway with the automatic. The four speed manual, five speed manual, and three speed automatic were still available. The Corolla Hardtop came only with the four-speed automatic. (There were eight models in 1983, the Hardtop, Sport Coupe, Liftback, Sedan, and Wagon with varying numbers of door).

Handling was improved through a new rack and pinion steering system, with power Assist on most models; the SR5 Sport Coupe and SR5 Hardtop could be purchased with a sports handling option, featuring stiffer springs and shock absorbers, a larger rear sway bar, a revised differential gear ratio for better torque at low and medium speeds, special seats with a unique fabric trim, raised white-letter steel-belted radials, aluminum wheels, and a wrapped, wider steering wheel. Only the SR5 Hardtop and Sport Coupe got a rear stabilizer bar; all models got a front stabilizer bar. The gas tank held 13.2 gallons for a remarkable distance between fill-ups. Rear brakes were drum, front were discs; all models had power brakes.

In 1984, the Corolla moved to the format pioneered by the Hillman Avenger: front wheel drive with a transversely mounted four-cylinder engine, and MacPherson struts up front and coil springs in back (the SR5 Coupe and hatchback and the station wagon would be converted later). Follow the front wheel drive Toyota Corolla.

Toyota Corolla specifications over the years